Find a Club
About Planet Fitness
My Account
Join Us

Planet Fitness offers a high-quality, unique gym experience at an exceptional value. In our community, you always belong.

At Planet Fitness, we're here to provide a unique environment in which anyone – and we mean anyone – can be comfortable. A diverse, Judgement Free Zone® where a lasting, active lifestyle can be built. Our product is a tool, a means to an end; not a brand name or a mold-maker, but a tool that can be used by anyone. In the end, it’s all about you. As we evolve and educate ourselves, we will seek to perfect this safe, energetic environment, where everyone feels accepted and respected. We are not here to kiss your butt, only to kick it if that’s what you need.

Many of our clubs are open 24 hours a day. We work to fit your schedule, not the other way around.

From front lobby and fitness machines to locker rooms and showers, a clean club is one of our top priorities.

Whether you’re looking for a customized exercise plan or need help using the equipment, our certified trainers are ready to help you.

We seek to provide a comfortable, safe and energetic environment where everyone feels accepted and respected.

A variety of high-quality, brand-name cardio and strength equipment is available at all of our PF locations.

They’re ready to give you a warm welcome and eager to help you however they can. Any time you need assistance or have a question, our club staff is at your service!

Planet Fitness USA was founded in 1992, in Dover, New Hampshire, USA. In the beginning, it operated much like every other gym in its small hometown and catered to the same small percentage of the population in the U.S. who worked out and belonged to a health club.

PF’s owners quickly recognized that there was a greater opportunity to serve a much larger segment of the population. They asked themselves, “Why does 80-85% of the population not belong to a gym?” The answer? First-time and casual gym users didn’t like the “look at me” attitudes and behaviors found in typical gyms, and they didn’t want to have to pay a lot of money to give fitness a try.

So they completely changed the gym environment, both in attitude and format, creating the non-intimidating, low-cost model that has revolutionized the gym industry. Planet Fitness became known as the “Judgement Free Zone®” – a welcoming and friendly community where people could feel comfortable regardless of their fitness level.

Today, Planet Fitness has become one of the largest and fastest-growing franchisors and operators of fitness centers in the United States by number of members and locations. With more than 2,200 locations in 50 states, Canada, Australia, and Latin America, Planet Fitness has continued to spread its unique mission of enhancing people’s lives by providing an affordable, high-quality fitness experience in a welcoming, non-intimidating environment. 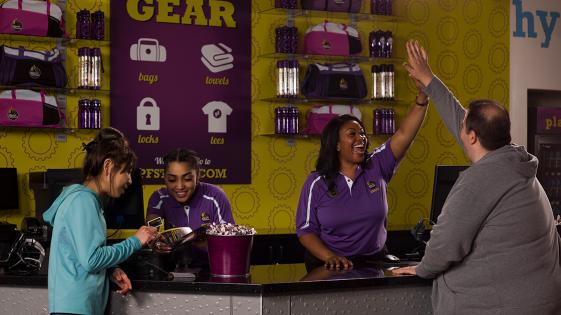 I just joined PF a few days ago … I was so nervous because I’ve never been to a gym, but everyone there made me feel so welcome. I really appreciate the customer service you provide. Thank you for helping me change my life!
Ash A.
I feel so energetic and comfortable at planet fitness. The pizza nights are awesome and so are the free mentos at the front counter! The staff enjoy a good laugh, we’re all good friends here
Gabriel
This has been the first time in over 20 years coming to a gym. This is a really good gym. It’s big so you have room and a great diverse range of people and ages. There is friendly staff and it’s just a comfortable place to be in. I will be trying the Free Training Sessions with Ben the Trainer today for the first time, I’m doing Chest & Biceps 30 min session
Louise
The PF staff is extremely friendly and helpful. I am always greeted with a smile and feel that the staff is happy to be there and help me with questions.
Valerie J.
There are people there of every age, shape, size and fitness level.
Julie M.
The best gym I have ever belonged to... not intimidating because it attracts so many different types!
Patricia W.
None of the attitude that you find at (other gyms)!
Derek W.
Find a ClubCommunity@PFAbout Planet Fitness
Contact UsMemberships
Privacy PolicyTerms and Conditions of UseSite Map